Young Swedish Flower Cockerels and Pullets: Everyone of them is unique! 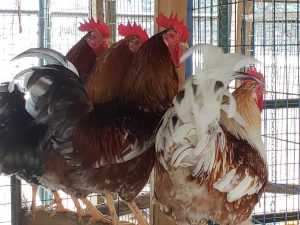 Status: An extremely rare breed not only in North America but the world. There are thought to be around 2,000 birds now in existence worldwide. In 2001, Sweden designated the gene pool and placed the Swedish Flower Hen on their endangered species list.
Class: Not recognized by APA

One of our prettiest chicken breeds is the Swedish Flower Hen. We obtained our stock in 2015 from BC and QC. Each bird is unique in its colouration. They are known to be cold hardy, good foragers, calm, a gentle breed and they have a friendly inquisitive nature. Their visual appeal needs to be witnessed first hand to be appreciated.

Roosters are very handsome medium sized birds and they are about the same size as our Ameraucana chickens. They are vigilant protectors while free ranging and they can be housed easily with other roosters in the bachelor pen.

The hens start to lay at an early age and produce around 200 or more medium to extra large cream colored eggs a year. When pullets first begin to lay, their eggs can be quite small but they will increase in size with age. Their eggs are light beige to creamy tan coloured.

Named for its colorful, spotted plumage, Skånsk blommehöna literally translates to “bloom hen.”  The white-tipped feathers make the birds look like a field of blooming flowers. Due to their natural development and unique characteristics, Swedish Flowers come in a vast variety of colours. Occasionally, a hen will show a small crest or tuft of feathers behind her comb.

Unlike most formal breeds of chickens that are intentionally bred to meet a certain standard, this Swedish bird is known as a landrace breed. They developed naturally over hundreds of years. The Swedish Flower Hen was developed in the southernmost province of Sweden over the last 500 years. It was first mentioned in Swedish journals in the early 1700s. These birds were used for meat as well as eggs and their feathers were used to fill duvets.

They were brought almost to extinction in the 1980’s due to commercialization of the Swedish poultry industry. Very few Swedes even know of the existence of this breed. A handful were found in rural villages and imported in June of 2010 to Greenfire Farms in the United States and later into Canada around 2012. Weight: rooster 5-7 lbs., hen 4-5 lbs.

Note: Please download the Order form to your PC (do not fill it in with your browser), save it to your PC, use Adobe Acrobat Reader to fill in our form and save it.
https://get.adobe.com/reader/
Then email the completed form in PDF format back to us.

Our family is a proud member of the following organizations:

Just finished my hatch of your beautiful Barred Rocks....a 100% hatch with shipped eggs! I now have 14 little chickies! Thank you for the superb customer service, egg-cellent packing job and the 2 extra eggs....and of course the successful management of your flock for 100% fertile eggs. Looking forward to watching them grow out. THANK YOU!

I attended the poultry swap in Quesnel this past weekend and came across several people who have purchased from you in the past, and all of us are VERY pleased with what we have gotten! We hatched 9/11 Houdans and 24/26 Australorps. Great hatch rates for shipped eggs!

I have seen Wild Acres setup in person and I aspire to grow as they have. They put their hearts and souls into their farm and it shows! If you want healthy beautiful, QUALITY birds then get them from here!

I am just so thrilled with my wild acres stock! I don't know where to begin!
I am particularly impressed with the Creme Legbars! Look at those gorgeous eggs! The size and colour is super impressive. I have been disappointed for several years with the Amers I had...but the Wild Acres stock is just phenomenal!!

Rachael from Chase BC

"Your fertile eggs hatched out beautifully! The bcm roo I kept is stunning, and I'm over the moon with the barred rocks "

I wanted to send you a few pictures and just tell you once again how pleased I am to have found your farm. I love, love, love my chickens. They are like pets but better because they don't require a lot of care and they lay presents every day!

Diana from Mara, BC

Very happy with my Jubilee's. Started laying at 20 weeks! I love them and get so many compliments. The personality of all are very gentle.

I want you to know that the Wyandottes and Houdans are growing into beautiful birds, I am so very happy with them. They are so friendly - the Wyandottes untie my shoelaces every time I go into their pen and the Houdans stop whatever they are doing and run to greet me😁

I ended up with 11/12 Polish and 10/12 Ameraucana from your eggs. They're 9 days old now. Ya a really good hatch for shipped eggs. I use Brinsea Octo 48 incubator.

Thank you for all the information you have provided to ensure a good hatch and your wonderful service that you have given us. I can't even begin to tell you how much I appreciate all the little extras you have done for our family!

I have always liked your packing! One of the best I have gotten from! And box marked so good! Excited for my huge order of eggs this year! You can tell you care for your eggs and shipping!

I'm really happy with the fertility on the eggs I transported from you Carolyn Wild.
Thanks so much for helping me get started. I am your adoring fan so expect pics and such.

These Marans chicks are huge! I didn't know they were dual purpose. Your Ameraucana stock is just awesome.

As always, your birds are great. By the way, the white Indian Runner is so popular, all the girls want him. He leads the ducks and geese now. He is always first on the way to the lake and back.

I bought 10 day old Maran chicks from you in the spring. I got 6 pullets. Some have been laying for a while but today I collected 2 very dark eggs! Beautiful!!! Thank you so much. Great birds.

I had an amazing hatch from shipped eggs and just want to thank Carolyn Wild for her beautiful addition to our farm. I have 20 chicks from the 24 shipped 🙂 Very pleased!